Standing With Stones: A Journey Through Megalithic Britain
(DVD, 2008)

I watched a very interesting program on the ‘standing stones’ of Britain, the megaliths, henges, stone circles, cairns and other neolithic structures built thousands of years ago across the British Isles.  Everybody knows about Stonehenge and Newgrange, but what about the other ones?  How many different megalithic sites are there?  What are their significance?

Standing Stones – (aka megaliths) solitary stones set vertically in the ground
Stone Circle – a monument of standing stones arranged in a circle
Stone Row – (aka stone alignment) a linear arrangement of upright, parallel standing stones set at intervals along a common axis or series of axes
Dolmen – (aka portal tomb, portal grave, or quoit) a type of single-chamber megalithic tomb, usually consisting of three or more upright stones supporting a large flat horizontal capstone (table).  Usually covered with earth or smaller stones to form a barrow.
Cromlech (Welsh) – usually refers to dolmens, however it is widely used in French and Spanish to describe stone circles
Cairn – a man-made pile (or stack) of stones, often erected as landmarks
Barrow – (aka tumulus, burial mound, kurgan) a mound of earth and stones raised over a grave or graves.  A cairn might also be originally a tumulus.
Henge – features a ring bank and internal ditch surrounding a central flat area.  May contain ritual structures such as stone circles, timber circles and coves.
Cist – a small stone-built coffin-like box or ossuary used to hold the bodies of the dead, perhaps under a cairn or long barrow
Cursus – (Latin for “course”) large parallel lengths of banks with external ditches, thought to be early Roman athletic courses

We journey through the UK and Ireland, staring in Southern England, making our way through Wales, Ireland, Northern England, Scotland, and the remote northern Scottish Isles.  One thing is abundantly clear – nobody really knows why these megalithic structures were built and what their exact purposes were.  Theories abound, however these ancient structures are still shrouded in mystery.

Here is a list of sites discussed in the DVD: 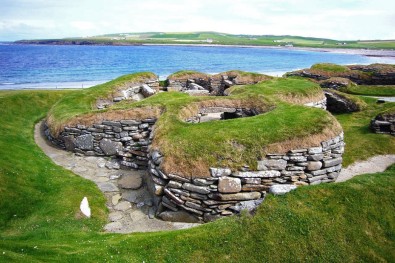