Persephone is a Greek vegetation goddess, daughter of Zeus and the harvest goddess Demeter (Roman Ceres).  Also known as Kore or Proserpina, she was also Goddess of the Underworld.

Demeter searched for nine days for her daughter, however was told by Helios what had really happened.  Hades had abducted Persephone, with the permission of Zeus, and brought her into his Underworld realm to be his bride.  Demeter, angry and grief-stricken, rejected the world of the Gods, and withheld her gifts of fertility so that no crops grew.

Zeus finally gave in and commanded Hades to release Persephone.  Unfortunately, Persephone had eaten some pomegranate seeds while in the Underworld, which bound her to remain in that realm.  As a compromise, Persephone was allowed to spend part of the year with her mother on earth. 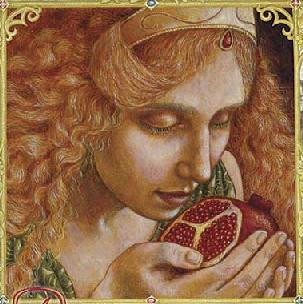 It is thought that the time Persephone spent with her mother was a time of joy, where Demeter would allow the earth to bloom with flowers and life.  However the time when Persephone was in the Underworld, the world was dark with very little growth and life, acknowledging Demeter’s pain and suffering.  This represents the seasons, the bountiful spring and summer, and the dark bleak winter.  Through this, Persephone/Kore was called ‘the Maiden’ and represented spring’s bounty.

Persephone and Demeter are central figures in the Eleusinian Mysteries, initiation rites held in the city of Eleusis based on the cycle of death and rebirth.  The Mysteries became very popular and promised life after death to initiates.

Sometimes Persephone and Demeter are thought to be two faces of the same goddess.  Also, Kore (‘the Maiden’), Demeter (‘Earth Mother’), and Persephone (‘Destroyer of Light’), can also be thought of as the classic Maiden, Mother, Crone triple goddess figure, from birth to death to rebirth.

Persephone was usually depicted as a young springtime goddess, holding a sheaf of grain and a flaming torch.