Yggdrasil is a massive tree at the centre of Norse Cosmology which links and shelters the Nine Worlds.  It is thought to be an eternal green ash tree whose branches stretch over the homeworlds and extend above the heavens.

Yggdrasil has three root systems, where the realms of Asgard, Jotunheim, and Niflheim are located.  Three wells lie at the base of each; the Well of Fate guarded by the Norns in Asgard (Urdarbrunnr), the Well of Wisdom guarded by Mimir in Jotunheim (Mímisbrunnr), and the Hvergelmir (Roaring Kettle), source of many rivers, in Niflheim.

The Norns live at the well at Urd/Urdarbrunnr, and are also known as the Goddesses of Fate, Goddesses of Destiny, or the Wyrd (‘Weird’) Sisters.  They were named Urðr (Wyrd) (‘past’), Verðandi (‘present’) and Skuld (Should) (‘future’).  Together the three Norns weave the threads of life (ørlǫg) which decides the fate of every human, animal and God.  Whenever a child was born, the Norns spin the fate of the child in their threads. 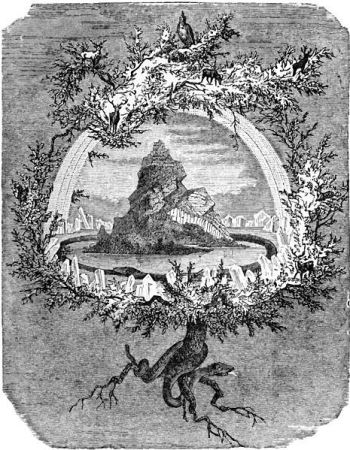 There are other creatures that live on Yggdrasil, such as the hawk/eagle Vidofnir (‘tree snake’) that perches in its highest bough, the messenger squirrel Ratatoskr (‘swift teeth’) in its branches, and the great dragon/serpent Nidhogg gnawing at its roots.  Four deer that represent the four winds, Dáinn, Dvalinn, Duneyrr and Duraþrór, also run across its branches and eat the buds.  As per the Norse creation myth, the fire giant Surt will set fire to Yggdrasil on the day of Ragnarök, which signifies the end of the world.